Tiwi is a first class municipality in the first district of Albay in the Bicol Region (Region V) of the Philippines and is located at the Northern East of Albay. The municipality is well known as a Pilgrimage site with its old churches; The Our Lady of Salvation Parish Church and The San Lorenzo Ruiz Parish Church, and for its Pottery and Geothermal Industry.

VIA AIR TRAVEL VIA LAND TRAVEL 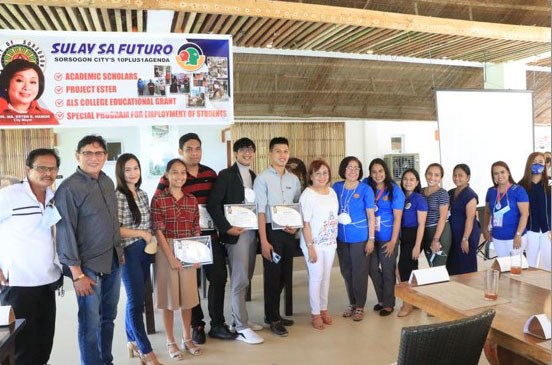 BAPAS, the office in-charge of (1) the College Academic Scholarship under the Sulay sa Futuro Program of Mayor @Ester Hamor and (2) Anti Drug Abuse Program for #Katranquilohan spearheaded the recognition ceremony these valuable programs.

Five (5) new engineers who are members of the Academic Scholars graduates  passed the February 2022 Mechanical Engineering Board Exam.  ME CArmela Eunice V. Fernandez; ME Jesua M. Olaybar, ME Rynan B. Caballera, ME Nessie Conda and ME Russel Jade M. Jaylo were present during the awarding ceremony led by no less than MAyor Ma. Ester E. Hamor assisted by Dr. Jhonner Ricafort, City Schoalrship Coordinator for Schools, Mr. Gerald Maligaso, the Sulay sa Futuro Program Manager, Ms. Beth Alindogan, BAPAS Chief and  Councilor Bhem Dioneda, the author of the the Sulay sa Futuro Ordinance which back up the program with legal authority.  The ceremony  was witnessed by the engineers’ proud parents and siblings.

These  engineers are again  added to the roster of professional achievers of the Scholarship Program the city has maintained through the years and is being kept stronger by the present administration of Mayor Ester Hamor.  The supportive Mayor is even looking at the possibility of 100% increase in the number of scholars to be taken in by the city or a total number of 1000 scholars should the budget clearly allows it without hampering the operation of other equally important programs of the city.

Back to back with it is the awarding of nine (9) Barangays that were recently cleared by the Anti Drug Regional Oversight Committee ROC) and were named as included in the list of DRUG-CLEARED barangays, adding up to the previous forty-four (44) cleared barangays and ten (10) Drug-free barangays.

Completing the list of  West District Barangays that are now cleared are the barangays of Talisay, Bitan-o, PangPang and MAcabog.  To date, West District barangays are the only barangays which were able to 100% clear their community as certified by the ROC.  Out of the 22 barangays located in the West District of the city, 22 are now officially cleared and are encouraged to consciously maintain such status.

Meanwhile barangay Salog, Almendras-Cogon, Balogo-East, Sampaloc and Sirangan are now categorized as drug-cleared barangays joining the seven (7) previously awarded barangays of the same clearance.  Updated list of the EAst District reveals that only (2) barangays are left to be declared pending approval from the president himself.

Mayor Ester Hamor happily awarded these barangays with certificate and even  cash prizes from her personal pocket as she continue to hope to be 100% cleared and for the City to be declared as Drug-Cleared.

In summary, 61 out of 64 Barangays are officially Drug cleared, breaking down to 51 Drug-cleared barangays and 10 Drug-Free barangays.  Three (3) remaining barangays have already submitted the necessary documents for clearing and is only waiting for the official declaration as cleared by President Duterte.